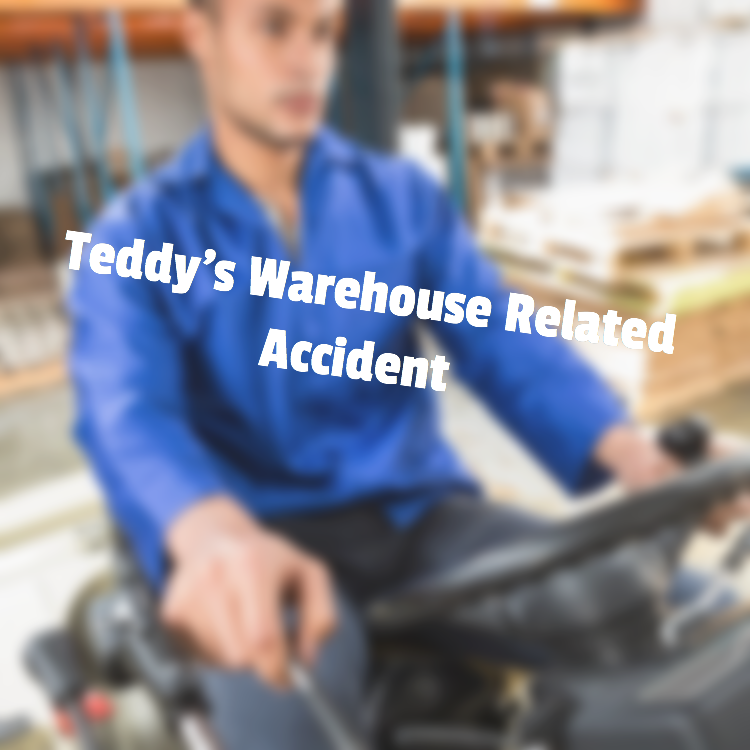 Fork lift driver Teddy is due to finish his shift. He’s just received a saucy text from his girlfriend and wants to get home ASAP. Using mobile phones while working on the fork lift truck is against the rules, but everyone seems to do it anyway and Teddy’s the most proficient driver at Chemicals Ltd; if anyone can text and drive, it’s him. Carelessly, he leaves his current load – palletised barrels of chemical waste – on a walkway in a blind spot.

Fork lift driver Martin starts his shift as Teddy leaves. They nod to each other and Martin gets to work carrying out the relevant safety inspections – acceleration, brakes, pneumatics – all check out fine. He signs off the paperwork and relieves Teddy.

Their boss, seeing the load abandoned by Teddy, steps off the walkway and onto the warehouse floor to inspect the barrels. This is dangerous as there are many electric fork lift trucks in the warehouse. Electric motors are very quiet and the noise level in the place is high enough that it’s hard to hear them coming.

Martin, a little too confident in his fork lifting abilities, reverses out with his load of barrels and zooms off before lowering his forks fully. This means the his view is obscured, and if he hits anyone, he’ll do some serious damage. The weight of his load and the machine amount to around four tonnes, and he’s travelling with that weight at head height. Luckily he doesn’t collide with a co-worker but does hit the chemical barrels left by Teddy, stopping just short of crushing his boss but showering him in acid.

Load still raised, Martin tries to swerve the fork lift truck away from doing further damage but his machine is unbalanced. Travelling with a raised load gives a high centre of balance and makes tipping over easy. He tries to jump out and away from the tipping truck but is caught by the carriage frame surrounding the operating seat – something known as the mousetrap. He is crushed to death instantly. His boss, meanwhile, screams in agony as his skin melts away until he is reduced to little more than a fleshy skeleton.

This disaster was entirely preventable. Errors made include:

Warehouse safety is everybody’s responsibility; though Teddy had already vacated the building, his carelessness indirectly caused two deaths. All employees must follow correct protocol and remain vigilant in order to ensure safety of themselves and others.